Animal Kingdom is the youngest Disney World park, built in 1998, and also the largest!

It’s a perfect park to enjoy with your preschooler and show them the culture of Africa, the jungles of Pandora and the diversity in the Animal Kingdom.

While I don’t believe you need an itinerary for one of Walt Disney’s most laid back parks, it does help with planning, especially on those once in a lifetime trips!

For your preschooler, there’s a list below detailing a One day Itinerary and a supplemental Two Day Animal Kingdom Itinerary for Animal Kingdom. Since you’re here, make sure you also save this Disney World First Timer’s Guide so you can save time and money!

Headed to Hollywood Studios with your preschooler? Thats another fun park that needs some preplanning to make it extra magical!

In order to have the most successful day at Animal kingdom with your 4 or 5 year old, you’ll need to bring along or buy some items. These are all in the preschooler packing guide, but we’ll cover a few quick ones for this park!

Stroller or handheld fan (this one is a serious life saver!)

Two pairs of shoes (this is the largest park and it’s a lot of walking!)

Some sort of electrolyte additive. This can be an electrolyte powder, trace mineral drops or gatorade. This is smaller as you’ll only really need it once a day, we tend to give our kids some powder in their water at lunch time to help them get through the day! (you can get gatorade at the resort!)

If you don’t have a stroller, today would be the day to rent one! I only have good things to say about this stroller rental company local to Orlando. They make it so easy! 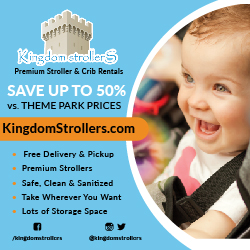 Renting From Kingdom Strollers Can Save You 50% – 75% vs. Theme Park Prices. Free Delivery & Pickup.

ALSO- if you have a mickey balloon on your stroller, leave it in the hotel room! These aren’t encouraged at Animal Kingdom as they are dangerous to the animals.

Explore Tree of Life/Animal around tree

Or get in line for Safari if it opens at park opening- line may take 35-65 minutes, but this is truly the best time to see the animals. It may open an hour after the park does

Walk to the Gorilla Fall’s Trail at 945. They should be very active this time of day!

Check the app for times, and Then head over to catch The Lion King Show.

Wrap up the evening with a walk back through Pandora and then exit while viewing the tree of life show. Animal Kingdom is not open super late, so consider this an early evening and get some sleep, or park hop/resort hop/ or head to Disney Springs! If you want to continue the Dino adventures, T-Rex restaurant in Disney Springs is a good option.

You can park hop to Disney’s Animal Kingdom at 2 pm (though plan to get there around 1:30)

Head into Animal Kingdom and stay to the right to head to the Mhajarah Jungle Trek followed by Feathered Friends in Flight at the Anadapur Theater.

Follow the path into Africa where you can catch a train out to Rafikis Planet Watch before it closes (it doesn’t stay open as late as the other attractions do!)

Check the times in the app to see if you are able to catch a later showing of ” A Celebration of Festival of the Lion King” which is located at the Harambe Theater in Africa.

After the Lion King Show, head down the walkway into Pandora. Wait times in the evenings are typically lower for Navi River Journey, but if the wait time is over 45 minutes, consider heading to DinoLand.

In Dinoland, enjoy the Boneyard Playground, Triceratops Spin, and the DINOSAUR ride.

Before leaving for the night, stand around the Tree of Life for the short Nighttime Show.

Having a list is only so helpful as you’ll need to consider some pitfalls that could stop this preschool itinerary in it’s tracks.

For one, the weather in central florida is very unpredictable. While a rainy day at Magic Kingdom or Epcot is no big deal, at Animal Kingdom, it closes most of the attractions. And you’ll likely be surprised at Disney World’s Rainy Day Gurantee.

Explore Tree of Life/Animal around tree with poncho

Leave and go back to the resort 330

If it’s only a light shower or a one hour rain, then you can just don some ponchos and a stroller cover and try to make up for lost time. BUT the thing about rainy days, is that it will make your wait times either super long or non existent. It’s a wicked wrench in the plans.

Another thing that can upset your day is having a party member with picky food preferences. Much of what you’ll find at Animal Kingdom is quick serve, so you can view the menus ahead of time to decide where to eat. If it’s on the other end of the park, try flip flopping some of the options in the itinerary. Navi River is listed for 9 as it fills up quickly in the afternoon, and the Safari, while fun anytime, will have the most animals at sunset.

That’s all for an Animal Kingdom Preschooler Itinerary!

As you can see, there’s a lot that can be done at Animal Kingdom, even more than you can fit into 2 days! There’s shows, adventure in the wilderness, animals, and rides galore. Animal Kingdom is also beautiful in the holiday season as many areas are lit up with colored LED lights and festive creatures come out to play!

While the itinerary’s above are perfect as is, I do encourage you to create a small bucket list of items you want to do! That way it helps with planning since you’ll leave satisfied at the end of the night when you skip something less important. Enjoy your Disney Vacation with preschooler in tow, it truly is a once in a lifetime trip as they grow up so fast!

Disney World Money Saving Tips you've got to see for 2023

This site is completely independent of Disney World (and it’s parent companies) and is not endorsed, affiliated or sponsored by Disney in any way. All opinions expressed here are my own.