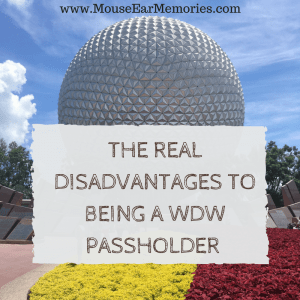 How can there be disadvantages to Disney?

Well… It’s true. There are a few areas that aren’t the greatest when you become a Disney World Annual Passholder.

Sure, it’s tons of fun

It’s not all magic and mickey mouse!

You’ll spend wayyy to much money

Oh my Mouse, we spend a lot of time and money at Disney. I do have some pretty cool tips for getting the most out of your Disney Merch though!

It’s cool that the annual pass discounts many things throughout the parks- but it doesn’t negate the fact that we still spend loads as an annual passholder. Try as we might to bring meals, snacks and drinks, we inevitably spend some money for a quick 5 hour trip.

Then theres the emails. Oh the Disney emails. Do they get you?

Because they get me!

I’ll see a promo for a hotel (especially one we’ve been dying to visit) and I’ll convince my Disney loving husband to run away to the parks for a weekend.

Then there’s the kids…

Do I really have to explain how hard it is to visit Disney, monthly, with two kids? Every season they see the newest and greatest additions to the toy displays. I mean we live 45 minutes from the parks… which leads to my next issue…

Your kid thinks they can visit Disney everyday

My son seriously asks to visit Mickey every. single. Day. “Can I see Mickey today?” “Can we go have dinner with Mickey?”

Which I know that normal kids ask, but it has bitten us in the rear end because we said yes a few too many times, and he knows it’s a quick drive away. So my kid is not only Disney and Mickey obsessed, but he knows if he asks enough that there’s a high chance on our next free day, that we’ll head to Walt Disney World (especially if I get another dang Disney Discount Email!!!).

And when you think about it, my Husband is just a big kid at heart, and HE thinks he can visit everyday. One day we just might do Disney for an extended period of time to see if they get bored with it, chances are that they’ll love it even more!

You know too many Disney Cast Members ?

This one is a real struggle, especially if you are a Florida Resident.

It seems like a good thing, because cast members have their own perks like free tickets, discounts and an entire resale store, but it also kinda sucks. Here’s why.

They tell you more info about Disney than you ever wanted to know.

You learn the behind the scenes info about certain restaurants, rides that had mishaps and how the employees can bicker when it comes to work schedules and days off.

You also hear about the ‘bad stuff’- because yes, there is occasionally mishaps at Disney. I’m not going into specifics here, because I know that it happens infrequently, but it does happen, and the locals do hear about it especially with 50 million annual visitors.

The good news is that you never hear about it, because it gets handled. Disney does everything it can to preserve the magic, so it keeps any party poopers from ruining someones vacation!! They have millions of visitors so its no surprise that everything doesn’t always go according to plan.

You become a Disney snob ?

This can be a good thing and a bad thing… but generally it’s one of those things that develops when you visit Disney a lot.

Because we go to the parks so often (and we also spend a good amount of time analyzing the parks, restaurants, and resorts) we’ve developed a ‘Disney Taste’ that makes us a little snobbish. We know exactly what we like, what rides we’re willing to stand in line for and what kind of days we want to go on (the crowds have to be worth it, or we’re simply not going).

While we haven’t done everything, we’ve done a lot. It makes it kind of hard to have a ‘spontaneous’ Disney day, but we have forced ourselves to do it (imagine no fast pass and no reservations! The horror! ) and it was actually fun every time we’ve gone in without planning ahead. Plus, I kind of like being a Disney lover/knowitall/snob- because Disney is a pretty fun place to be!

You have to go to another place to experience the Disney Magic ?

This one is true to an extent. Before we had kids, we were little burnt out on Disney. We had done all and seen all- we really wanted to go on a cruise or to Disneyland to get a fresh view.

Well, instead we had kids, and its been a beautiful adventure to experience it through the eyes of our kids… but we still dream of other parks.

I think that’s why you see so many travel sites start to slowly cover other places. Its not that they run out of things to talk about (seriously, there’s like way too much to cover) but it’s that they need excitement in their lives. So for now, we’ll just keep going to different resorts, and anticipating the new additions to the parks (and some remodels here and there that keep us on our toes!)

Basically, being a Disney passholder is a big bowl of… EXCITEMENT

So there you have it folks. Unless you have lots and lots of days off, lots of money to blow on the House of Mouse, and no cast member friends, you shouldn’t become a Disney Annual Passholder. ?

Who am I kidding! Everyone should be passholders. If you aren’t a pass holder yet, check out my list of Passholder tips! I’m kinda hoping that if we all rush Disney over the next year, they’ll open another park!!! These ‘problems’ are the best ones to have.

Check out my list of free items at Disney!

This site is completely independent of Disney World (and it’s parent companies) and is not endorsed, affiliated or sponsored in any way.